The Buddy Bear Trust was established in 1988 at the request of parents who wished their children with cerebral palsy to be taught using Conductive Education as provided in the Peto Andras Institute in Budapest.

Following the screening of two BBC programmes about a boy named, Joe with cerebral palsy and the work of the Peto Institute parents from Ireland and the United Kingdom wanted Conductive education to be part of the education provision.

The Buddy Bear Trust established local support cross community committees all over Ireland to raise awareness to the need of the children, to raise funds and to focus attention on the need to improve the provision for children with cerebral palsy both North and South of Ireland.

The Buddy Bear Trust added the power and the authority of the political and Church Leaders both North and South of Ireland to the groundswell of popular support for children with cerebral palsy and the need to convince the Peto Institute that it was safe and appropriate to allow their Conductors to staff a Conductive Education School in Ireland.

The decision makers including high profiled leaders such as the leaders of the main political parties, the Presidents of Ireland and Hungary, the Church Leaders including the Cardinal of Hungary, the Catholic and Anglican Archbishops of England and the late Holy Father John Paul II together with the American Ambassador, Jean Kennedy Smith, Sir Harry Secombe and other celebrities joined the community in trying to help children with cerebral palsy.

The Buddy Bear Trust together with a deputation of all the MPs in Northern Ireland convinced the UK Government of the need to allow the children of Ireland to benefit from the arrangement Sir Nicholas Scott and Kevin McNamara had made with the Hungarian authorities to bring Conductive Education to the UK.

The Taoiseach and members of the Government agreed to consider a joint cross border project for a Conductive Education Centre of Excellence but it was not politically possible because of the sectarian divisions in Northern Ireland and the concern by some of joint involvement.

The Buddy Bear Trust fundraised to open the first Conductive Education School in Ireland with the active approval and involvement of Dr Maria Hari, Director of the Peto Institute.

The Department of Education (NI) inspected the school and recognised it as an Independent Special Conductive Education School able to teach children with cerebral palsy by qualified Conductors.

The Education and Library Boards were able to pay the fees of children with “statements” to attend the school. Three Education Boards have sent children to the school from it was first recognised by the Department of Education.

The numbers of pupils at the school has decreased because the Education and Library Boards are not sending children with statements to it. The recent Inspection Report commended the school and recommended that the Buddy Bear Trust and the Education and Library Boards should work together to maintain the valuable resource for children with cerebral palsy.

The Buddy Bear Trust has always tried to work in partnership with the Education and Library Boards and Health Services and all those individuals and organisations involved in the education of children.

Should the Buddy Bear School be forced to close because of a lack of meaningful co-operation between the Education Boards and Health Services and the Trust the children of Northern Ireland will be denied the benefit of Conductive Education.

The forced closure of the Buddy Bear school will mean that the children with cerebral palsy from Northern Ireland will not have parity of treatment with children in the rest of the United Kingdom who have the option of being educated using Conductive Education.

Recent publicity has resulted in a number of parents contacting the Buddy Bear School to seek information about Conductive Education.

Arrangement should be made to retain and protect the Buddy Bear School until an appraisal to ascertain if it would be appropriate to open a Conductive Education Centre of Excellence on a North/South basis is carried out – a Centre similar to the Centre of Excellence for Autism in Middletown, which is the result a cross-border project as a rising from the requests of parents. 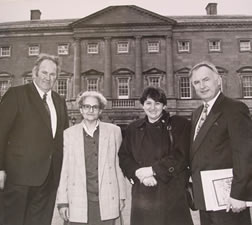 TD Mr Seymour Crawford arranged for Dr Maria Hari Director of the Peto Institute and Mrs Eve Beck and Brendan Mc Conville, Chairman of the Buddy Bear Trust to meet with Prime Minister Albert Reynolds to discuss the possibility of a joint North-South Conductive Education School for the children of Ireland (1989). 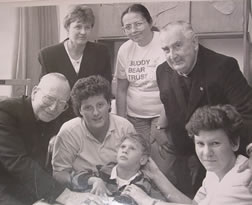 Mrs Eva Beck, Senior Conductor from the Peto Institute and Mrs Gabi Foldi from the institute helped the Buddy Bear Trust to organise the first ever Conductive Education Summer School in the UK.

Thanks to the support of the Community, the political and church leaders the first group of Buddy Bear Children from Ireland travelled to Budapest to be assessed by the late Dr Maria Hari, the Director of the Peto Institute.

The success of the work encouraged and motivated all associated with the Buddy Bear Trust to bring Conductive Education to the children of Ireland.

The men in the hats who helped organise the visit include the late Brendan Mc Caul, Tommy Mc Crystal, Oliver Lavery and Brendan Mc Conville.

Without the support and encouragement of these individuals, the members of the Buddy Bear committee and the community children with cerebral palsy would have to travel to Budapest to receive Conductive Education.

Teamwork is the key to success.

President Árpád Göncz in 1990 signed the Triangle of Hope photograph taken in Dungannon to launch the campaign to make Conductive Education available to children of Ireland suffering from cerebral palsy.

Árpád Göncz was born in Budapest on 10 February, 1922 in a family of intellectuals. He graduated from Pázmány Péter University of Sciences Law School in 1944. While a student, ha was working in the National Land Loan Institute between 1939-1944.

He was conscripted in February, 1944, but in 1945 he deserted his unit ordered to Germany. As member of the Táncsics Battalion of the Freedom Front of Hungary Students, he participated in the resistance movement. He was captured several times by the Soviets, but he always managed to escape.

He was member of the Independent Smallholders’ Party (FKgP) from 1945. First he was Chairman of the Budapest youth section of FKgP and he was also the editor of the periodical Nemzedék (Generation.) Later he was the parliamentary secretary of the Party, then personal secretary to Béla Kovács. After the dissolution of FKgP, he worked as an unskilled worker, then as a welder and a locksmith of pipe-works.

He enrolled at the Gödöllo University of Agriculture in 1952 (GATE) finishing four years of studies.

After 4 November, 1956, he took part in working out the memorandum as the position of the Hungarian Democratic Independence Movement, which was conveyed by the Government of India to the Soviet Government in order to settle Hungarian-Soviet relations. In February, 1957, he helped to get the manuscript by Imre Nagy ‘In defence of the Hungarian people’ abroad.

Ha was arrested in May, 1957. The Popular Court Council of the Supreme Court sentenced him to life imprisonment on 2 August, 1958 without the possibility of appeal. In March, 1960, he participated in the Vác hunger strike; he was released in 1963 in an amnesty.

He was specialised translator in the Veszprém Research Institute for Heavy Chemical Industry, then from 1964, he worked in the Soil Improvement Company. He tried to finish his GATE studies of plant cultivation, but he was expelled from the university. He became a free-lance writer and literary translator on 1965.

He was founding member of the Network of Free Initiatives in 1988, then founding member of the Alliance of Free Democrats (SZDSZ) He was managing director of SZDSZ in 1988-89, then in 1989-90 he was member of the SZDSZ National Council. He was a founder of the Committee for Historical Justice in 1988, later he was President thereof. He was managing president of the Budapest Chapter of the Human Rights League. Chairman of the Writers’ Association from 1989 to 1990, then Honorary President. Member of Parliament from 1990. Speaker of the House between May and August, 1990, then provisional President of the Republic.

We we delighted at the historic news that all the leaders of the political  parties have agreed to establish a new Assembly to administer the affairs of the country. We have pledges of support from nearly all the MLA’s to Save Buddy Bear Trust School for children with cerebral palsy until the Assembly can secure its long term future.

The parents and children hope that their new Buddies will act quickly to save the school which needs funds because the Boards have not been informing parents that it is an alternative to the existing schools.

“At a time when we were at our lowest Conductive Education and their focus on what Oscar could do, not on what he could not or might not do, lifted us up and gave us the encouragement and guidance we needed to help our son progress.”

“Early intervention is key and that has always been emphasised at Buddy Bear. Conductive Education has proven to work for Amelia and I would encourage other parents to find out more about it.”

“To my relief Buddy Bear Trust Conductive Education School has been a lifeline to help with CP mobility and learning development. Find out more about the school and get in touch.”